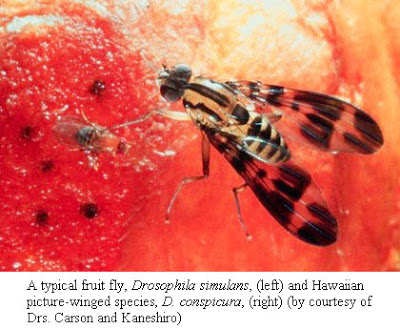 The variety of drosophilids, from here. In the classification used in this post, the species illustrated would be Sophophora simulans and Idiomyia conspicura.

Today’s Taxon of the Week is a group of which one particular species has already occupied a reasonable chunk of screen time at this site. The recent taxonomic controversy over Sophophora melanogaster* has been covered here, here and here, and I’m sure that by now we’re all well and truly sick of the horrid little beast. The Drosophilidae is a family of some 3500 species of which S. melanogaster is but one. Surely it’s time some of the other drosophilids were given their dues?

*As noted in earlier posts, there is really no justification for including the Sophophora species in the genus Drosophila. Even if you subscribe to a classificatory theory that forgives paraphyly, there are simply too many non-Drosophila genera separating Sophophora from Drosophila sensu stricto to make including the latter in one genus reasonable (see Linde et al., 2010, and various other references mentioned therein). It’s like the entomological version of West and East Pakistan. [facetious snark] So now the decision about appropriate naming has been officially made, can we please all get over it and deal with the consequences? [/facetious snark]

Drosophilids are treated as part of a large grouping of flies known as the acalyptrates. Acalyptrates possess short antennae with a horseshoe-shaped fissure between the antennae and the upper part of the face but lack a calypter, a lower lobe at the base of the wing found in houseflies and blowflies. Distinguishing the various acalyptrate families from each other can be an absolute nightmare (I speak from painful experience) but the features of Drosophilidae include an incomplete subcostal vein in the wing, three (occasionally two) pairs of bristles on the face with the front pair pointing forwards and the remainder pointing backwards, and usually no bristles on the anepisternum (one of the side plates on the thorax) (Grimaldi, 1990).

Pair of Drosophila endobranchia courting on the carapace of the land crab Gecarcinus ruricola whose mouthparts will become home to their commensal larvae. From Stensmyr et al., 2008.

Most drosophilids are small flies (the largest belong to the genus Idiomyia and have wingspans of up to two centimetres). The majority of species feed as larvae on yeasts and the like growing on decaying plant matter but a number are more outré in their dietary habits (Ashburner, 1981). Scaptomyza larvae mine leaves while larvae of Lissocephala powelli, Drosophila carcinophila and D. endobranchia live as commensals on the mouthparts of land crabs, feeding on the bacteria growing there. Several species of various genera are predatory, mainly on small plant-sucking bugs such as scales and whiteflies though other targets are known (including two unrelated species feeding on frog eggs and at least one record of larvae of a generalist species taken from a secondarily infected wound of a surgery patient). The Drosophila simulivora group includes four West African species whose larvae are aquatic predators of midge and sandfly larvae. Perhaps the most incredible carnivorous drosophilid is the European Cacoxenus indigator which lays its eggs in the brood cells of the mason bee Osmia coerulescens. The mason bee arranges its cells in single file in a long tube and the female Cacoxenus will insert a single egg into each cell except the last. The fly larva feeds on the food stores left for the bee larva and eventually on the bee larva itself (though it is unclear whether the fly actually attacks the bee while it is alive or simply scavenges it after it dies from strarvation, as it has been known for the bee and fly to both emerge alive from a single cell). The reason the female Cacoxenus does not lay in the terminal cell is that, once her own larvae pupate into adult flies, they are unable to break free of the brood cell themselves and are dependent on the one surviving bee to release them as it frees itself from the nest.

Two males of the hammer-head fly Idiomyia heteroneura performing competitive displays. This is an endangered species with a restricted range on the island of Hawai’i. Photo from here.

The highest concentration of drosophilid diversity is found in the Hawaiian islands which are home to perhaps more than 1000 species (O’Grady et al., 2003) divided between the genera Scaptomyza and Idiomyia (the latter referred to by many authors as ‘Hawaiian Drosophila“). Many of these species, it should be noted, are exceedingly rare and localised and many remain undescribed. Molecular analysis indicates that the Hawaiian drosophilids form a single clade, indicating a single colonisation of the island (O’Grady & DeSalle, 2008). However, Scaptomyza also includes a number of continental species that appear to be derived from a Hawaiian ancestor.

Grimaldi, D. A. 1990. A phylogenetic, revised classification of genera in the Drosophilidae (Diptera). Bulletin of the American Museum of Natural History 197: 1-139.